skip to main | skip to sidebar

Marguerite Wildenhain
Marguerite Wildenhain, an internationally known ceramist, author, and teacher, is considered to be one of the most accomplished ceramists in the United States during the twentieth century. Ceramics Monthly recognized Wildenhain as one of the world’s greatest living potters or ceramic artists. For four decades she lived and worked at Pond Farm, an artist’s enclave, located in what is now the Austin Creek State Recreation Area, Guerneville, California. Here she taught yearly summer sessions from 1949 until her retirement in 1980. She continued to live at Pond Farm until her death in 1985 at age 88.

Marguerite Wildenhain was born in France in 1896 of German Jewish extraction. The family moved to Berlin when she was a child, and there she attended the School of Fine and Applied Arts. After graduating she apprenticed as a pattern designer for a porcelain factory. It was there that she decided to study pottery. Upon discovering the newly formed Bauhaus school of art and design, founded by Walter Gropius in Weimar, Germany, Wildenhain moved and began studying at the Bauhaus in 1919, where artists such as Paul Klee, Wassily Kandinsky, and Gerhard Marcks were on the faculty. When the Nazi party took majority in parliament, Gropius moved the school to Dessau in 1925, however, the pottery department did not follow.

In 1926, Wildenhain took a position as head of the Ceramics Department at the Municipal School of Fine and Applied Arts in Halle-Saale. Here she remained true to the Bauhaus principle that artists should design quality wares that could be easily mass-produced, and thus stay true to their craft as well as being valued members of society. During this time she developed a collection of models for Royal Berlin and was certified as a master potter by the German government.

In 1930 she married Franz Wildenhain, one of her students. With the growing Nazi power it was necessary for her and Franz to move to the Netherlands in 1933. There they opened and operated a successful pottery studio. With the German invasion of Poland in 1939 Marguerite decided to go to America, and as a French citizen she was able to do so, however, Franz, a German citizen, was not.

Marguerite arrived on her own in New York in 1940. Shortly after her arrival she heard from her friends, Gordon and Jane Herr. The Herr’s had recently purchased 160 acres in Northern California with the intention of creating an art colony, and invited her to join them. She immediately headed to San Francisco, and after arriving took a position teaching ceramics at California College of Arts and Crafts in Oakland (now CCA).

In 1942 she resigned from her position at CCAC and moved to what was now called Pond Farm. Here she lived in a tent while helping to rebuild a nineteenth-century livestock barn into a pottery studio, eventually building a small cabin for herself. Eventually, after becoming a U.S. citizen, she was able to bring Franz to America. By 1949 other artists, both American and European, began arriving at Pond Farm.

Pond Farm
Pond Farm continued as an artist’s colony until about 1952, when a number of things, including the death of Jane Herr, caused a gradual dispersal of the group. While many of the artists moved away, Marguerite Wildenhain stayed on and continued to teach summer sessions each year. She traveled around the country at other times, teaching seminars and workshops at various schools and institutions.

Students came from around the country and the world to study with her, where she taught “basic and fundamental elements that go into making a good piece of pottery.” During the two-month summer sessions twenty-some students worked on wheels designed by Wildenhain, based on those used at the Bauhaus. She expected her students to work hard and be dedicated to their craft, teaching the importance of “grounding your life in your craft and your craft in your life.” While firm in her teaching style, she developed a following of devoted and life-long friends. The students became a family—her family—and many remain in contact with each other to this day.

Many Pond Farmers, who are located throughout the country, continue to create, teach and sell their artwork. Some have moved on from ceramics to other media such as sculpture or painting, but the influence of their experience at Pond Farm remains a strong element in their work and in their lives.

Today, Pond Farm Pottery Studio remains substantially unchanged from its appearance during its active years, 1940s to 1980. While not open to the public, the entrance can be seen from the road through Austin Creek State Recreation Area.


– Satri Pencak, Curator
Director of Exhibitions
Sebastopol Center for the Arts
January 2007
Chronology
1896 Marguerite Friedlander born in Lyon, France, October 11.
1919 Enters Bauhaus art school in Weimar, Germany.
1926 Becomes head of ceramics department at Municipal School for Arts and Crafts at Halle, Germany.
1930 Marries Franz Wildenhain.
1933 Marguerite and Franz move to Holland and set up a pottery studio.
1940 Marguerite flees Europe, arrives in New York, then settles in Northern California to teach at CCAC in Oakland. Franz is unable to follow.
1942 Moves to Pond Farm, helps Gordon and Jane Herr develop the studios.
1949 Other artists arrive and classes begin at Pond Farm in various disciplines, including ceramics.
1952 Jane Herr dies, other artists begin to disperse, Wildenhain teaches summer sessions in pottery on her own.
1963 California State Parks acquires Pond Farm, Wildenhain has permission to remain on the property, where she continues living and teaching.
1980 Last summer session and kiln firing, Wildenhain retires from teaching but stays on the land.
1985 Marguerite Wildenhain, age 88, dies at Pond Farm.
2002 CSU San Bernardino mounts Ripples, an exhibition of the work of Wildenhain and her students.
2007 Sebastopol Center for the Arts presents Beyond Pond Farm: The Legacy of Marguerite Wildenhain, in collaboration with Marguerite Wildenhain: Bauhaus to Pond Farm, curated by Patricia Watts for the Sonoma County Museum.


﻿
Posted by Sebastopol Center for the Arts at 2:45 PM No comments:

Changes at the Center

I'm letting everyone know that I recently resigned from my position as Director of Exhibitions at Sebastopol Center for the Arts. After eleven great years it's time for me to more on. I will be developing my business as an Independent Curator and I will be staying very much involved in the art community, both near and far. I'll be at SCA through the end of February.
Best to all, Satri
Posted by Sebastopol Center for the Arts at 4:20 PM No comments:

The SCA Members Show is in the Gallery with over 200 pieces in a variety of media. A number of pieces have already sold, so if you're looking for a fantastic gift this is the place to shop. And if you don't find anything in the gallery, there is always the "Store" with cards and jewelry and other things that glitter. 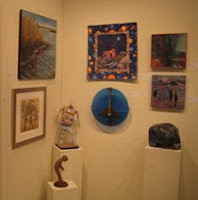 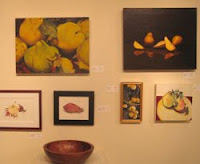 Posted by Sebastopol Center for the Arts at 1:04 PM No comments: 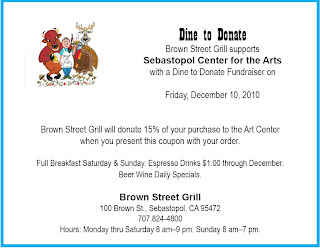 Don't forget to submit your artwork for the Annual SCA Members Show & Holiday Sale. This is a nonjuried exhibition and the deadline is Tuesday, Dec. 7, 3 to 6 p.m. The maximum size limit is 25" wide, but please get a copy of the prospectus for complete guidlines, they are available on our website or at the Center.

The show opens on Friday, December 10, 6 to 7:30 p.m. and runs through December 31.
Also, Dine to Donate! On the day of the reception, Dec 10, the Brown Street Grill, just a block away from the Center, will be hosting a Dine to Donate fundraiser for us. They have great food, so please support them and help them support the Art Center. The coupon is available at the center and on our website.
Posted by Sebastopol Center for the Arts at 4:05 PM No comments:

Hi everyone, it's been a while since my last post, but now I want to announce the NEW Sebastopol Center for the Arts website. Go to http://www.sebarts.org/ and see for yourself. If you have a shortcut on your computer that you used before you may have to refresh or redo the shortcut. In any case get to the new site however you can, it really is nice.

The next question is what do you want to see on this Blog? What is the best use for it?
Posted by Sebastopol Center for the Arts at 11:06 AM No comments:

SCA Members Show (A Show of Our Own)

Hi Blog visitors, The Annual SCA Members Show is coming right up. This is a nonjuried show with a focus on sales of artwork for the holidays. If you are not a current member you can sign up when you bring your piece in. There is a size limit so you will want to get the prospectus and read it carefully. You can get a prospectus on our website, http://www.sebarts.org/, or request one via e-mail to satrip@sonic.net, or come into the Gallery and pick one up. The deadline is Monday, November 30, 3 to 6 pm.
Posted by Sebastopol Center for the Arts at 2:40 PM No comments:

Here is a sampling of work in the Dualities exhibition, which continues through November 29.

Posted by Sebastopol Center for the Arts at 2:49 PM No comments: